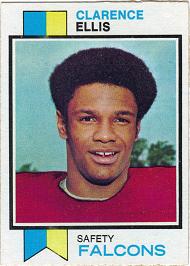 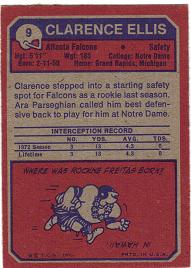 
Ellis was a great player at Notre Dame, even if Ara P didn't say so himself on the back of the card. The Notre Dame website says he was voted one of the top 25 Irish since 1970, not bad at all. He was a consensus All-American in 1971, picked off 7 passes in the 1970 season.

After being picked first by the Falcons, Ellis stayed for three years, getting a couple interceptions per season. This is his rookie card. Topps would skip a year and bring him back in 1975, at another low number card (18).

He wouldn't play anywhere in the NFL in 1975. Googling up some newspaper articles, we find that Ellis had asked to be traded, which he was, to Denver for Jerry Simmons and more. About a month later the Sarasota newspaper mentions Ellis going in for minor left knee surgery. Minor knee surgery in 1975 does NOT equal minor knee surgery in 2011.

In September of 1975, in a Miami newspaper artice, Ellis is listed as out for the season. In July of 1976, after failing a team physical, Ellis became a free agent after passing through waivers.

In 1979. Ellis lost a lawsuit brought against the NFL for negligence. The AP article stated the Colorado court agreed with the broncos' claim that "Ellis failed to comply with the mandatory arbitration requirements of his contract and his personal injury claims were barred by reason of the Colorado Workmen's Compensation Act." And that was that.

So when you hear about the NFL veterans trying to get a little compensation for the injuries suffered in the "older days" of pro football, now you can see how the players were treated in the court system back in the day.

The cartoon...no matter what position the player is at (Freitas was an OL) he is always HUGE and carrying a football.
Posted by Eric C. Loy at 2:35 PM