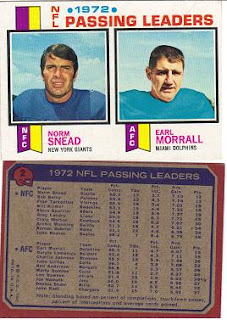 Well after getting card #1 with those great running backs leading the way, you would expect REAL greatness in card #2 and passing leaders. Well...

You get Norm Snead, a perfectly good player for the Giants at the time, and Earl Morrall for the Dolphins. On the back you see a sideways accounting of some sort of bizarro world algebra that decided the top passers of 1972. I didn't understand it when I was 7, and I don't understand it now.

We couldn't even use this card as a checklist of great quarterbacks to look for in the packs! Daryle Lamonica didn't get a card in 1973 and Roman Gabriel's situation was a real mess for Topps.

Morrall ended up playing a lot for the eventual World Champion Dolphins due to an injury to Bob Griese. Unfortunately, Topps couldn't get a picture of him in a Dolphin uniform. Morrall's high number 1972 card has him in a Colts uni and I believe his 1973 close-up shot does too. Here they re-used his shot from the 1972 set and painted his uniform a weird blue hue that I'm sure was all the rage in the early 70's, but wasn't very close to the Dolphin blue.

To our young minds, this card made no sense. Where was Roger Staubach (Craig Morton was the Cowboy representative on the list) and Terry Bradshaw (absent)? Who were John Reaves and Dennis Shaw? Was Bob Berry really a better quarterback than Fran Tarkenton??
Posted by Eric C. Loy at 2:07 PM