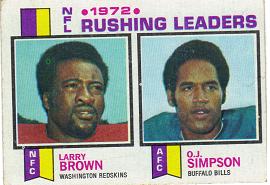 1973 Marked the second year Topps put league leaders in their football sets, and the first to put both AFC and NFC leaders on the same card. When I first got this card way back in '73 I thought it was the greatest thing. First of all, here's O.J. - pre-2000 yard season and all them legal trouble things, looking young and halfbacky (new word for you) and every bit the superstar. Second, here's Larry Brown...just off the Super Bowl all big and fullbacky (spell checker hates me). And on the back... 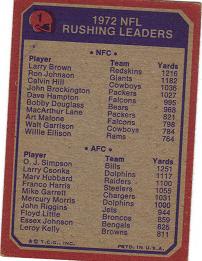 A handy list of all the great running backs in the league!...Hey! What's that Bobby Douglass guy doing there? Douglass, the Bears QUARTERBACK was a strong-armed big fullbacky guy that was all the Bears running attack after Gale Sayers was retired.

Back in 1972, 1000 yards in a season was an amazing feat...and so many made it! Csonka and Morris of the champs (HAD to get the Mercury Morris, one of the most fun cards of the set)...Brockington of my favorite Packers...some guy Ron Johnson of the Giants....Mike Garrett....the guys used these league leader cards as checklists to get the best players in the league. Most of us were still too young to really KNOW most of the players...but if they were LEAGUE LEADERS they must be good.

The Packers (who almost never threw the ball in 1972), Cowboys and Falcons each had two players in the top ten in the NFC while the Dolphins (who also rarely threw) were the only two-player team in the AFC (and that didn't include Jim Kiick).

The number 1000 was fully ingrained in us as kids with this card and the RECEIVING LEADERS cards...if the player was at or near that magic mark, he was worth hanging onto.
Posted by Eric C. Loy at 12:58 AM