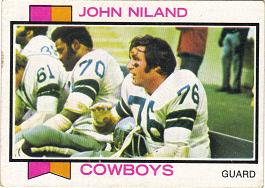 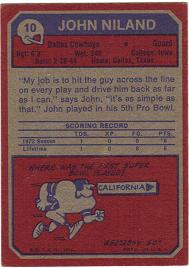 Here is John Niland taking a break on the sidelines with fellow linemen Rayfield Wright and Blaine Nye. Looks like Calvin Hill in the far back there.

Niland was a great lineman for the Cowboys, starting in 1966, drafted in the first round out of Iowa. He made it to six pro bowls and a dozen post-season games and should be a Hall-of-Famer eventually. He finished his career with a stop in Philadelphia in 1975.

Topps didn't think that Niland was worthy of a card until 1972, when they also gave him an All-Pro card. Both his regular and All-Pro rookies are in the all-expensive third series, so they are worth a pretty penny. Niland did have a 1969 Glendale Stamp. (Credit: Vintage Football Gallery. Go there!)

Topps used some game action shots in a "Highlights" subset in the 1961 set, and used black-and-white small shots on the 1962's. Of course some of those 1962's weren't of the actual player on the card, but there you go. That was it for Topps and game day shots for awhile, though the Philadelphia cards had some nice team play cards with in-game shots.

We would have to wait until 1971 for in-game and sideline shots to come back. Joe Kapp and Dennis Shaw each had game action shots on their card, and O.J. Simpson had a sideline shot. 1972 saw a few sideline (or at least game day) pictures, and three IN ACTION subsets. The playoff and Super Bowls cards had action shots too.

The 1973 series brought back the in-game action, in a sometimes confusing way as we will see later. This is the first horizontal individual player card of the set...Topps used these with varying success this year after bringing them back in 1972.

The back shows the TD he scored against the hapless Eagles, and there's that monster player again in the cartoon, carrying a football! Looks like he is Cali bound.
Posted by Eric C. Loy at 4:50 PM