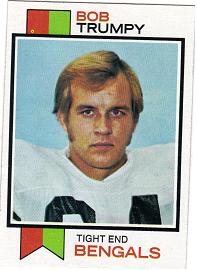 Bob Trumpy was a fine TE for the Bengals from their inception until 1977. The college he was drafted from was Utah, as the card says, but he started college at Illinois. After not cutting it academically (he has been less generous to himself in describing what happened) at Illinois, he went to Utah.

In 1972 he had the most passes caught in a season for his career, second on a pass-happy Bengals team. In 1969 he averaged 22 yards per catch, and in 1971 he lined up occasionally as a WR. He finished with 298 catches, averaging over 15 yards each time. His best comparisons career-wise according to Pro Football Reference include Billy Joe DuPree, Steve Jordan, Alge Crumpler and Keith Jackson, some pretty good company. After he retired, Trumpy went successfully into broadcasting, first on TV football casts on NBC, then to radio. He was on the TV broadcasts of a couple Super Bowls, and has done several other sport events over the years.

This card has a picture taken fro the same set of photos his 1972 card came from. Topps would simply re-use Trumpy's 1975 cards photo for his 1976 final card photo. His rookie card came out in 1970, then Topps skipped a year with him (1971 was another odd year for Topps subject choices in a small set) before issuing cards from 1972-1976 for Trumpy.

Topps had all sorts of trouble with Bengals cards in the team's early years. In 1968, as an expansion, the Bengals pictured all had different uniforms on. In the messy 1969 set, again, none of the Bengals were given shots with Cincinnati uniforms on.

The 1970 cards re-used blurry head shots from the 1969 Glendale stamps set for the few Bengals used at all, Trumpy no exception (Eric Crabtree was pictured in a clear shot, but a different uniform). The worst of these was QB Greg Cook, who had been a rookie sensation, whose blurred photo was used not only for his regular card, but for his glossy, Topps Super, and Kellogg's 3D cards as well! Cook would not get another Topps card as his career was cut short by injury.

In 1971, none of the Bengals featured in the first series were pictures in Bengal uniforms. In the second series, four Bengals were pictured in head shots, fuzzy quality once again, actually in white team uniforms. Two Bengals, Virgil Carter (whose Topps story is a bit strange - we'll get to him later) and Steve Chomyszak were in different team's uniforms. Chomyszak was in a Jets uniform...he had played only two games for them in 1966! He had been on the Bengals since 1968, yet Topps couldn't be bothered to get a picture from the last three years! I'm just one card away from the 1971 set, that deserves it's own blog.

The Dutchman Van Brocklin looks awfully burly to be a QB in the cartoon....
Posted by Eric C. Loy at 9:07 PM