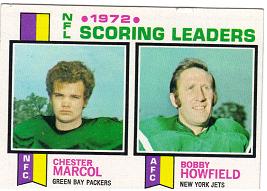 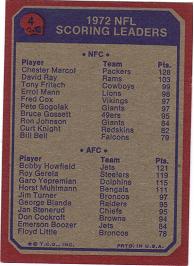 This is actually the first card for both, 1972 being Marcol's rookie season, and Howfield not getting a card though he'd been around since 1968. Marcol, originally from Poland, is airbrushed green apparently in a picture of him in a College All-Stars jersey. A LOT of those were seen in the 1972 set. Howfield, originally from England, is coming off his career year by FAR.

Every player on the back is represented in the set except Toni (misspelled Tony on the card) Fritsch. He would not get his own card until 1974, though he was on the team in 1971. Mike Clark got the card nod then as Dallas kicker.

Notice, too, that Ron Johnson guy is there again from the Giants. That makes three of the first four cards his name appeared on.