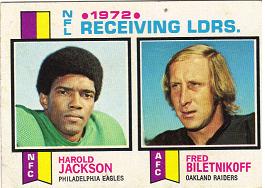 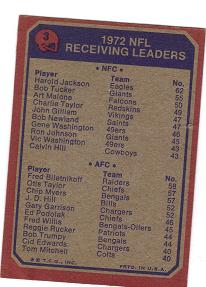 Ugh please excuse the cockeyed scan of the back, I'll get the hang of this yet. That is a pinhole above the N on the front of the card, the only scar on a nice example.

The receivers are well represented here, listed by number of receptions rather than yardage. Harold Jackson, classy wide receiver from the Eagles at the time, was nicely ahead in the NFC, while Fred Biletnikoff (with the 70's long hair) edged out Otis Taylor of the Chiefs and Chip Myers (!) of the Bengals by just one catch in the AFC.

There is a good sprinkling of tight ends, WRs, and running backs on the lists. With Norm Snead winning the NFC passing title, you'd think there would be a few Giants and there are, TE Bob Tucker and RB Ron Johnson (see the Rushing Leaders card). The 49ers get a pair of  unrelated Washingtons, Gene and Vic in the top 10.

In the AFC, no Dolphins. They just didn't pass that often. The Chiefs had two, Taylor and RB Ed Podolak; the Chargers had the "Grey Ghost" Gary Garrison and RB Cid Edwards; and the Bengals would have two-and-a-half, with Myers, TE Bob Trumpy, and RB Fred Willis, who went to the Oilers during the season. Willis would lead the AFC in receiving while with the Oilers later on.

One sad note, the Colts leading receiver was TE Tom Mitchell. He had pretty much replaced John Mackey at that point. The Hall of Famer Mackey passed away very recently.

The only player on the back to not get a 1973 card was Bob Newland of the Saints, he would have to wait until 1974 for his rookie card. Topps made some strange choices of Saints to feature in 1973...more on that to come!

Big thanks to Johngy for being follower #1! He's always got great stuff on his page, please check it out!
Posted by Eric C. Loy at 4:54 PM