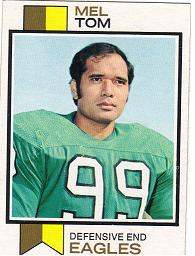 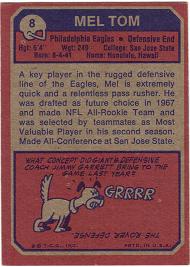 What a great picture of Mel Tom. His uniform has a very odd color to it, a washout green reminiscent of what a washout the 1972 Eagles season was.

Tom had been with the Eagles since 1967, but Topps didn't get around to a card for him until 1973. He had been on the 1972 Sunoco Stamp set for the Eagles. As his career would have it, Tom would go to the Bears during the 1973 season. He would have to wait a year for his last Topps card, a mustachioed picture of him looking quite different than the regal form here. He also was on a 1975 Wonder Bread card.  After playing just a few games for the Bears in 1975, he was done. Wikipedia at one time listed Tom as the first native-born Hawaiian to make the NFL, but that is not true. Charley Ane was a Giant ten years before Tom was drafted.

According to Pro Football Reference, one of the most similar careers to his was Eagles teammate Gary Pettigrew.

One of their losses was a 62-10 thrashing by the Giants. Another loss, 28-7 to the Cowboys, saw them get only 6 yards net passing for the game. QB John Reaves threw for 85 yards on the plus side, and he was sacked 9 times for a loss of  79 yards. Net gain: 6 yards.

In that game, Dallas scored TWO safeties on Eagles punting plays, and Cowboy guard John Niland scored a TD on a fumble recovery in the end zone.

The Eagles were a much better offensive team the next season due to some key acquisitions and the emphasis on different players under a new coach, but the 1972 team was just not very good at all.

The cartoon's growling dog refers to the "rover" defensive scheme that the Giants used in 1972. It helps the Giants to a, yes, 2-11-1 record. That dog needed a muzzle.
Posted by Eric C. Loy at 3:31 PM