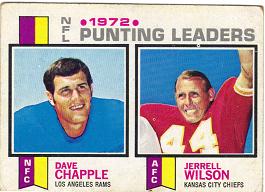 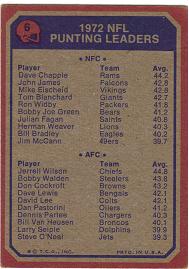 This is the last of the leaders cards for 1973, and the first time Topps put out a punting leader card. Heck for years, Topps wouldn't even acknowledge that punter was a position! Punter specialists were listed as QBs or halfbacks or just backs. Punting stats were on the backs of some cards, but they were not listed as punters only.

In 1968 and 1969, punters got their own cards, but their position was listed as KICKERS. That gave a couple teams two kickers, like the Vikings in 1968 with Fred Cox and Bobby Walden. In 1970 Topps finally relented and cards #185 and #222 were PUNTERS Dennis Partee (who, ironically was also a placekicker) and David Lee. So having a punting leaders card show up just a couple years after Topps finally recognized the position was a victory for punters everywhere!

Dave Chapple is airbrushed into an oddly blue outfit, and that might have been a Bills uni as he played one game for them in 1971. Jerrell Wilson is one of the all-time great punters, you see him right after booting yet another 50-yarder in practice.

On the NFC side on the back, John James finished second in punting but did NOT get a card. HE would wait another year for his rookie Topps card, and would later get a Record Breaker card in 1975, and an All-Pro card in 1976. Strange omission.

Jim McCann would never have a Topps card. He came out of Arizona State and was the regular punter for the 49ers for two years, 1971 and 1972. He floated to the Giants in 1973 and averaged an ugly 24.5 yards/kick and had 3 of his 12 punts blocked. Not good to lead the league in blocks when you only kick 12 times. He got one last chance with the Chiefs in 1975 far a few games as a fill-in and averaged 35.2 in 14 kicks with one block.

Everyone else on this card got their own solo card in 1973. Several on the list played other positions, Bill Bradley led the league in interceptions, Dan Pastorini was a QB, Bill Van Heusen and Larry Seiple were listed on their cards as punters but both were used quite a bit as receivers. Partee and Don Cockroft were among the last combo punter-placekickers in the NFL.

Next up: individual player cards!
Posted by Eric C. Loy at 3:34 PM