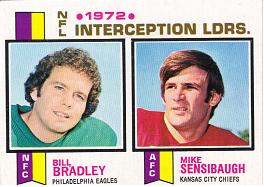 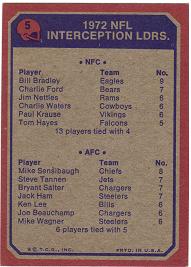 This marked the first time that Topps issued an Interception Leaders card. One the front, you have the angelic-looking Bill Bradley (not the basketball-playing politico) of the Eagles, and Mike Sensibaugh of the Chiefs, looking as if Bradley just passed gas.

Topps found it a little rougher go on the back that the other leader cards...finding a top ten when the leaders don't even HAVE ten interceptions....so we get shortened lists and "players tied with" line.

In the AFC list, the only player to not get his own card in the set was MLB Ken Lee of the Bills. He only played two years, 1971 and 1972, and drops off the pro football planet after that 6 interception season. The Hawaiian-born Lee was with the Lions in 1971, and started 6 games for the Bills in 1972. His 6 picks went for 155 yards and a TD.

On the NFC side, Charlie Waters would have to wait until 1975 to get his first card. Tom Hayes would never get a Topps card, despite an awfully interesting career. (He is on the 1972 Sunoco stamp set at the great Vintage Football Card Gallery here.) In 1971, Hayes scored three touchdowns, one on a fumble return, and TWO on blocked punt returns. He had two interception return TDs for the Falcons in 1973, and one more for the Chargers in 1976. The cornerback finished his career that year in San Diego (he had gone to San Diego State). Given some of Topps choices for cards over the years, Hayes is a strange one to ignore.
Posted by Eric C. Loy at 8:27 PM