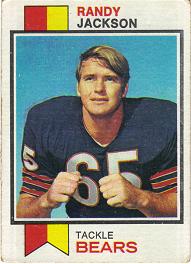 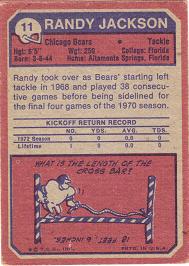 Meet Randy Jackson of the Bears. No I'm not doing any American Idol joke.

This picture of Jackson ranks right up there with Mel Tom's in that it is clean, with the perfect blue in the background. Jackson is striking the generic blocking pose that picture takers loved to get in the fifties through the seventies. "I'm not holding, Mr. Referee!"

On second look, I've noticed a bit of an outline over the right shoulder of the lineman...could the impossibly blue sky behind this man be a photo trick? Eh. At least his uniform is correct.

Randy Jackson was a 4th round draft pick of the Bears in 1966 out of Florida, and Pro Football Reference has him listed as a starter all 14 games of the 1967 season, despite what the short bio on the back says. He was a solid, unspectacular player, never an All-Pro, but certainly reliable. This is his Topps rookie card, though he is on a Sunoco stamp for 1972. He would be in the 1974 and 1975 sets, and one of the cards in the Pro Draft Milton Bradley game. (loved that game) He was done after the 1974 season, after an eight-year career.

The back of this card shows one of  Topps' mortal weaknesses in football cards: the meaningless stat. Instead of a couple more lines about Jackson, we get to see that he did not pick up the ball on a kickoff return in 1972, but he DID pick it up once SOMEtime in his career, and fell on it for no yards. Big whoop. Research says it was all the way back in 1967 in the SECOND GAME OF HIS CAREER. This is worthy of taking up valuable bio space on a card? Unfortunately, more of that to come.

Hope you can see the back better, I'm trying something new. The cartoon shows huge football guy again, measuring the crossbar. At least this time he isn't running with a football again, but he is smiling. I wouldn't be smiling standing on a crossbar eight feet off the ground in metal slippery spikes, I'd be planning my fall and hoping medical insurance would cover it.