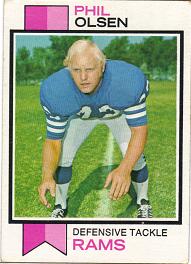 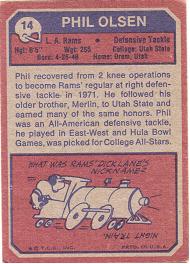 Meet Phil Olsen, younger brother of all-time great Merlin. Before you go placing him in the Tommie Aaron/Ozzie Canseco unfortunate brother category, check out his story.

This Olsen was a great football player. In college he was a monster, one of the greats to ever put on a uniform in the state of Utah, and he was drafted in the first round of the 1970 draft by the Patriots. He suffered a terrible knee injury in a practice for the College All-Star Game (my bet this resonated in the cancelling of the entire concept of that game) and never played a down for the Pats. Traded to his brother's team, the Rams before 1971, he injured the knee AGAIN, but still recovered quickly enough to join the starting lineup later that season. In 1972 he was again at DT alongside Merlin for a good part of the season. That 1972 defensive line didn't have the vaunted Fearsome Foursome name, but listen to who they had: Merlin and Phil Olsen, Coy Bacon, Jack Youngblood, Fred Dryer and a rookie named Larry Brooks who would be in the All-Pro game five times.

After becoming a reliable backup for two seasons, he was traded to the Broncos for 1975 and 1976, Switching to offense at center, he was big on special teams, and I see where at least one source has him with four blocked kicks in 1976. He finished his NFL career on the injured list in Buffalo.

So just because he wasn't the Hall-of-Famer in the family....don't cha know. Besides, there was a third Olsen brother in the pros: Orrin, who was a center for the Chiefs in 1976.

I had a chance encounter with Mr. Phil Olsen in the late 1980's. While working as a postgame co-host for the flagship radio station for the Fighting Illini football team in Champaign, IL, and after the Illini beat up on the visiting Utah State squad, my also-young co-host went on a screed about how Utah State was bad and always had been and always would be.

Phil Olsen was in town, as I think he was working the radio booth for Utah State, and was driving to the airport when he heard this. He called us on the air, rather angry at what he just heard. My co-host's eyes got huge and he clammed up...all I could think about was the thought of this guy from the football card above lunging at me in anger...

I let him get his frustration out, then slowly edged the talk into an interview about how Utah State had been having rough times and what they needed to do to get back to where they were when the Olsens were there. Everytime my co-host started to open his yap, I stopped him. He got us there in the first place.

Eventually, Mr. Olsen was calmed and it turned out to be as pleasant as one could have hoped for. Thank you Mr. Olsen for not squashing two young loudmouthed radio guys way back when. You are a gentleman and very large.

By the way, the co-host went on to some real success in the business, running several stations in some good sized markets. And here *I* am.

The cartoon is about Night Train Lane! And of course there's a train, engineered by Big Football Guy holding a football again and smiling that big smiley smile.
Posted by Eric C. Loy at 5:11 PM