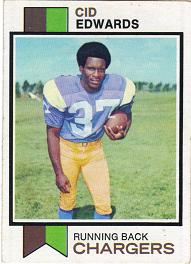 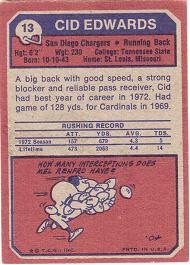 Cid Edwards, looking every bit the fullback in this picture. Cleophus J. Edwards was an undrafted free agent when he made the Cardinals in 1968 out of Tennessee State. In his first year as a pro, he carried only 31 times but he averaged 6.9 per carry. He kept up the high per-carry marks in 1969 and 1970 (4.7 and 5.0) but dropped dramatically in 1971 to 2.9. The Cardinals decided to go for a younger, former first round draft pick for their backfield, so they traded Edwards to the Chargers for Leon Burns. Burns had fizzled with San Diego in his rookie season. He fizzled even more with the Cardinals, averaging 2.7 per carry in the lone year he was there.

Edwards flourished at first with the Chargers. He was second on the team to Mike Garrett's 1000-yard rushing season, and caught 40 passes to boot. His 1973 year was almost as good, and he led the team in rushing that year, but San Diego faltered to a terrible 2-11-1 season as Dan Fouts was in his rookie year and Johnny Unitas was 40. Time for a new head coach.

Tommy Prothro took over, and newspaper reports say he and several veterans did not see eye to eye. Edwards was quoted as saying "The man never communicates with his players" after he was suspended indefinately by Prothro when he didn't show up to a pre-game meeting before a 34-0 destruction at the hands of the Packers. A bad flight home afterwards saw future All-Pro Coy Bacon suspended as well, and several other Chargers fined. Edwards said he'd never play for the Chargers again, and he didn't.

Edwards was dealt to the Chicago Bears on draft day 1975. Unfortunately for him, the Bears drafted a couple of guys named Walter Payton and Roland Harper, so Edwards wasn't utilized very often. He was waived after the season.

Cartoon: Big Football Guy is smiling big, carrying a boatload of footballs in this one. Kind of a random subject, but Mel Renfro was a great player, so ok.
Posted by Eric C. Loy at 10:14 PM