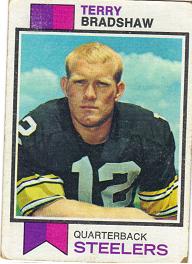 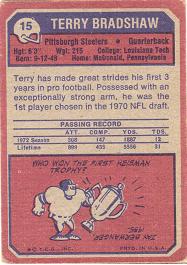 As you can see, this one is a bit dog-eared. It may be one I pulled from a pack back in 1973 and kept ever since. Young Terry Bradshaw. Looks focused and ready to go on this card.

In 1969 the Steelers won their first game of the season and then lost the last 13. If a rookie head coach did something like that today, he'd be gone at the end of the season. Chuck Noll, however, stayed on. It was going to take a lot of work to build the Steelers into champs from chumps, and they'd started by drafting Joe Greene in 1969. This dismal unit was led by Dick Shiner, Kent Nix and Terry Hanratty.....time to get a quarterback.

One of the biggest wins in Steelers' history was the coin flip with the Bears for the #1 pick in 1970. With that pick they selected Terry Bradshaw from Louisiana Tech. Later in the draft they would take another fair player named Mel Blount...and the building had begun.

Bradshaw had a terrible rookie season, completing just 38% of his passes and throwing four times as many interceptions as touchdowns. The team improved, though, to 5-9.

The next season, seeing Bradshaw didn't have enough friendly targets to throw to, Pittsburgh drafted WR Frank Lewis in the first round. They also took Gerry Mullins for the offensive line later, and a few defenders of note....Jack Ham, Dwight White, Ernie Holmes and Mike Wagner. Bradshaw's percentage went up, to 55% but he was still throwing way more interceptions than touchdowns and the team improved only one game, to 6-8. Bradshaw was getting extreme heat from critics for his perceived lack of intelligence and was becoming withdrawn and moody with the press. Steve Sabol from NFL films did a retro piece on the young Bradshaw and how the criticism affected him in the day.

The sub-.500 record just gave the Steelers another chance to pick high and well in the draft, and they did, taking Franco Harris. His 1000-yard running took the pressure off of Bradshaw and the rapidly developing Steel Curtain defense added up to a 11-3 record, and two playoff games. The Steelers were now THE STEELERS and would be for some time, especially after they drafted 4 Hall-of-Famers in five rounds in 1974.

How much of this can be attributed to Bradshaw? Well, not all of it, but he was the center of the offense (aside from a short benching in 1974) for one of the most dominant teams in NFL history. After his first two seasons, the Steelers won 99 games and lost just 38 when he started. You do the math.

Of course Bradshaw came out of his shell more as the wins started to come, but every once in awhile you can see some bitterness come out in his TV studio coverage. Maybe he wasn't ever the most talented QB or the book-smartenest one either, but if you wanted to win a football game from 1972 to the early '80s and your life depended on it, you better have had Terry Bradshaw behind center.

Cartoon: Big Football Guy has a BIG FOOTBALL TROPHY that looks nothing like the Heisman. Maybe that's what it looked like when Jay Berwanger won it.