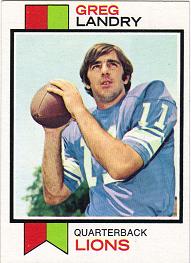 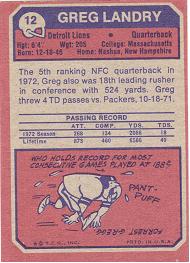 A big welcome to Greg Landry and his very 70's haircut!


Greg Landry was the Lions' number one pick in the 1968 draft. He didn't play much his rookie year, as Bill Munson got all but two of the team starts. Those two would alternate as starting QBs in two winning seasons for the team, then Landry took over in 1971, finishing second in the league in passing. In 1972, not only did Landry finish in the top 10 in passing again, he had over 500 yards rushing, good for second on the Lions. He also rushed for *9* touchdowns that year. The Lions were 8-5 with a good young QB, a strong rushing attack (Altie Taylor, Mel Farr, Steve Owens) and looking up.

In 1973, Landry suffered a knee injury and sat out a lot of the season. Bill Munson and Landry would share the duties through a couple mediocre seasons and would be joined by 49ers castoff Joe Reed later. Landry bounced back for a good 1976 season (17 TD/8 INT) but was sacked a league-high 55 times in the process.

Still hobbled by knee problems, Landry went to the Colts in 1979 and threw the most passes in his career that season as Bert Jones was injured. Unfortunately the team around him was lousy and his personal won-lost record was 2-12. Jones was back the next season and Landry backed him up for two years before moving on the the USFL, and back for one game with the Bears in 1984.

Landry was involved in some off-the-field controversy after the 1971 season, as his contract was about ready to run out. The Lions squawked openly about teams meeting with Landry and his agent before Landry's contract was to expire. Landry eventually re-signed with the Lions, of course.

Later in his coaching career, Landry would become the University of Illinois offensive coordinator under Lou Tepper. He installed a high-performance passing offense but was booted out right after a bowl win. Covering that story locally was not easy and some of the facts still haven't come out about it, but Landry had been angling for other jobs while out on the recruiting trail. That did not please Tepper, and Landry was gone.

In his NFL career he completed 55% of his passes for over 16,000 yards, and rushed for 2,000+ yards at 6.2 per carry. Would have been interesting to see what might have been had there been no injury, or if he was around in today's mobile-QB days.

In the cartoon Big Football Guy is still running, though exhausted and apparently he fumbled the football somewhere. Forrest Gregg's record at that time has been LONG eclipsed, and is currently held by a PUNTER. Jeff Feagles. Yes, Jeff Feagles with 352.
Posted by Eric C. Loy at 6:23 AM