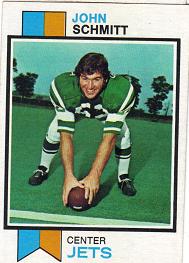 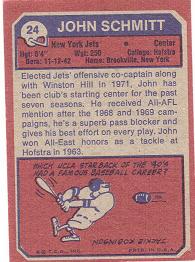 John Schmitt, Jets center on this third rookie card in a row for the set. Hardly a rookie by this time, Schmitt had been a Jet since 1964 and a starter since 1966. Undrafted out of Hofstra, Schmitt would steady a line that had Winston Hill, Randy Rasmussen and Dave Herman that fronted Joe Namath for their great Super Bowl win over the Colts.

The Jets had held training camp at Hofstra for the first time before that season, odd coincidence.

Schmitt played eleven years, ten with the Jets. He would appear on a card in the 1974 set, then in the 1975 set as a Packer though he was not a starter for the whole 1974 season. Schmitt was an interim short-timer during a Packer period where they basically started three centers over a 30-year period. Jim Ringo started from 1954 to 1963, Ken Bowman from 1964 to 1973, then Larry McCarren from 1974 to 1984. Ken Iman, Bill Curry, Bob Hyland and John Schmitt....none cracked the lineup during this time. Schmitt was released by the Packers, ending his pro career.

John Schmitt went on to the board of directors of many charities, and was a chairman of Schmitt-Sussman Enterprises, a national insurance distributor. He was honored by the Epilepsy Foundation of Long Island in 2010.

A New York Times article in the 1990s about the Super Bowl champion Jets mentioned Schmitt showing off his Super Bowl ring proudly. They didn't know it was a replica. Schmitt had lost the original in 1971 surfing off the coast of Waikiki.

Reports surfaced a couple years ago that the ring had been found by a lifeguard, and his family found the ring in the lifeguard's estate. As of this last September the family had said they wanted to get the ring back to him, and Schmitt had offered to fly the family to New York. I hope it either happens or has happened by now, he seems like a good guy and has waited long enough for something he should be proud of.

CARTOON! Big Smilin' Football Guy can't get enough baseball tomfoolery! Could Jackie Robinson have been the 40's Bo Jackson? The real question I have is, what NFL team would have allowed him to play at that time?
Posted by Eric C. Loy at 9:49 PM