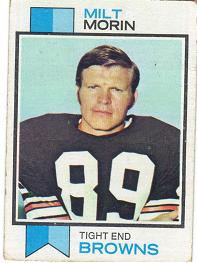 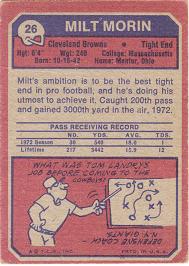 Milt Morin, the first U.of Massachusetts player taken in the first round of the NFL draft in history.

Morin was a two-time All-American at UMass, on some awfully good teams. Drafted by the Browns and the Chargers, he chose Art Modell and the cheap Browns. One story has Modell asking Morin what he would have expected to make as a schoolteacher. When Morin replied $6000, that's what Model offered as a contract. While it is believable, other sources have the contract in the $16,000 range. This article,  published after Morin's death in 2010, says Morin once said he wished he had never signed with Cleveland.

Morin's first Browns team was a fine offensive squad. With Leroy Kelly taking over for Jim Brown and running for over 1000 yards, Ernie Green added 700+ more. Frank Ryan found Morin along with the RBs and receivers Paul Warfield and Gary Collins,and they managed 9 wins. Morin missed a lot of 1967 with a knee injury as the team repeated a 9-win season.

Collins went down injured in 1968, and a healthy Morin finished second on the team in receiving, as Bill Nelson took over the QB duties. Morin caught 43 passes for 784 yards and a 18.4 ypc..all career highs. The Browns beat the Cowboys in the playoffs, but fell to Baltomire by shutout for the conference title.


The Browns again advanced over the Cowboys to the conference championship game in 1969, with Morin third on the team in catches. They were beaten by Joe Kapp's Vikings this time. 1970 was a different matter altogether.

Though Morin had a fine year, averaging over 16 yards a catch, the team was bogged down by casting off Paul Warfield and Ron Johnson. Homer Jones, brought over from the Giants, was not productive at all, and Leroy Kelly slowed to just over 3 yards per carry. The team finished at .500. The Browns started off 1971 by posting a 4-5 mark, but rattled off five straight wins to close the season and get to the playoffs. Leroy Kelly was getting a lot of carries, with less productivity, and Morin finished second to Fair Hooker in catches for the Browns.


With Mike Phipps taking over at QB in 1972, the team won 8 of it's last 9 to get to another ten-win season, though they were edged out by the All-Time great Dolphins in the playoffs. That Browns team never scored more than 27 points in a game all year. The offense didn't do a lot, and Morin caught just 30 balls for a solid 18 ypc.

Morin was used less frequently in 1973, as the offense ground to a standstill. Phipps threw twice as many picks as TDs, Leroy Kelly averaged less than 3 yards a carry, and a 0-2-1 finish to the season kept the Browns out of the playoffs. In 1974, the team that had surged to a ten-win season two year earlier, crashed to a ten-loss season. Phipps and Brian Sipe alternated throwing the ball to the other team, and Morin averaged less than two catches a game for the year. Morin would catch just one pass in his final season of 1975, as new coach Forrest Gregg went to a youth movement. Oscar Roan would be the new TE. Morin was released in the 1976 training camp.


Morin caught 257 passes in ten NFL seasons, and www.pro-football-reference.com compares his career to the likes of Keith Jackson, Alge Crumpler, Jerome Barkum, Paul Coffman and the like. Morin was in two All-Pro games, 1968 and 1971.

After the NFL left him, Morin opened an antique store, and built many houses in the Hadley, Mass. area. He worked at a local corrections facility, mostly on the overnight shift, for 15 years until his retirement. There is a fine article on Milt Morin the man here. Unfortunately, you will note that Morin passed away a couple of years ago, not long after he was named to the College Football Hall of Fame.

Morin was on five Topps cards in all, his first in 1971. His 1972 card has a premium on it, being in the third series. Topps lazily re-used his 1974 photo on his final card in 1975. This card seems to be an awfully good picture of the man, humble, happy to be there. The text on the back may not have been quite fulfilled, as Morin played at the same time as a lot of great TEs, but he was certainly one of the best of his time. I didn't know much about him as a 7-year-old when his picture came out of the pack; I used the cards to find out what pro football was all about. Milt Morin is what pro football should be all about.

CARTOON! Tom Landry is drawing what appears to be a 43-man squamish play (Mad Magazine article here) . You can tell it really isn't Landry because he is smiling. Landry and Vince Lombardi were assistant coaches on the same Giants team at one time....
Posted by Eric C. Loy at 11:15 AM No comments: 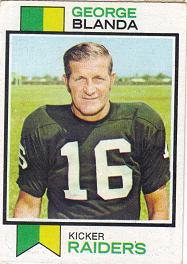 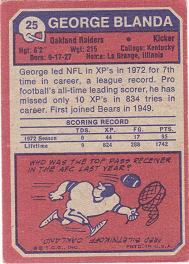