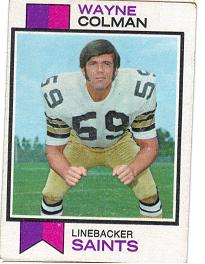 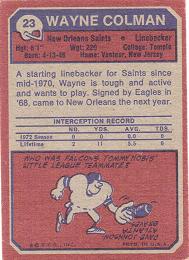 Here's linebacker Wayne Colman of the Saints. He started his pro career with the Eagles in 1968, as the back helpfully explains.He was a free agent signee in a time where the NFL had 17 rounds of draft... and the Eagles had 20 picks in 1968.


They chose five players listed at linebacker in those 20 picks, none of which played as many pro games as Colman. The number one pick, Tim Rossovich, became well known for off-field antics and some Hollywood roles later on, but he would play ten less games than Colman for his career.
.
Of all those 1968 picks, nine would make the pros in one fashion or another. Only OL Mark Nordquist would play more pro games than Colman.

Colman would make his way to the Saints in an injury-filled 1969 season (broken leg), and stay with them thru the end of his career in October of 1976 (retirement). He missed the entire 1975 season after breaking an arm in a preseason game.

Later in life, Colman would play a big role in young people's lives as a coach and teacher at Ocean City High School in New Jersey. One of his student/athletes was his son, Doug Colman, who penned a nice tribute on his father's retirement right here.

Doug Colman went to Nebraska, and was drafted by the Giants, having a nice five-season career as a LB in the NFL.

Upping the number of cards in the set to over 500 for 1973 allowed Topps to give some recognition to some of the solid veterans of the game, the day-to-day grinders like Wayne Colman who fought thru injuries and passed the game along to his son. I am very happy to present to you Mr. Wayne Colman. Linebacker, father, coach, teacher.

CARTOON! Big Smilin' Football Guy has a baseball glove on! This card was put together after the Braves traded for Davey Johnson, who was a high school teammate of Atlanta's Tommy Nobis. Who knew that Johnson would explode for over 40 homers in a couple of months.
Posted by Eric C. Loy at 5:23 PM