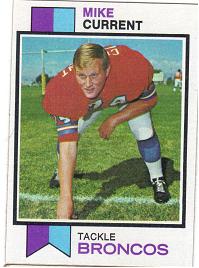 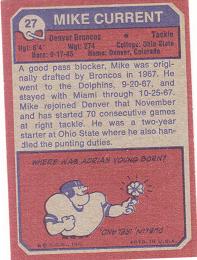 Mike Current is shown here on his second Topps card, his first coming in 1970. He played just as many games in the years between, in fact starting all of them for the Broncos, but the limited number of cards in each set played a part in who landed on the checklist. Current gets to come back in this expanded 500+ card set.

A look at the back of his card shows the ignominious start Current had to his 13-year career. As he told the Toledo Blade in 1970; " I had to be the worst tackle ever to come to the pros. I was cut twice by the Broncos and twice by Miami in 1967 and that's still an AFL record." A good article about that start is here.

Well, Current stayed current and active after that tumultuous first season, sticking with the Broncos thru 1975, when right knee surgery limited him to 7 games. His 105 straight starts set the Denver record at the time. There were some hints in the press that Current had some 'disagreements' with the coach over the last two seasons with Denver.

He was off to Tampa Bay in the expansion of 1976 where he started all 14 losses, and was traded to Miami (strangely enough) for 1977. An interesting article here goes into how Current had never been in a playoff and finally had a chance going into the last week of the season. Though Miami tied for first in the division with the Colts, they lost the tiebreaker and missed the wildcard. Current would play in first round games the next two seasons with Miami, then retire after the 1979 season.

Current's post-NFL life certainly was sour. He did publish two books...Rememberin' Life in the Trenches and Bush Justice.

He also was accused in 1994 of sexual harassment of an employee at his cable telemarketing company. In January of 2012 he apparently shot himself dead in a wildlife refuge in Oregon. He was about to come up on charges of sexually assaulting three children under the age of 14. The story of his death is here.

His son, Justin, has a memorial website for his late father.

CARTOON! Big Smilin' Football Guy gots a four-leaf clover! Lucky him! Too bad none of the kids that got this card would probably have known who Adrian Young was. Young was a LB for the Eagles that was 'featured' on only one Topps card, in 1971. Even then, Topps didn't really feature him, using the wrong picture (Rick Duncan).