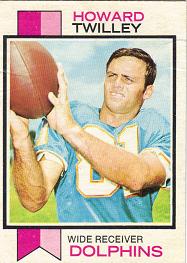 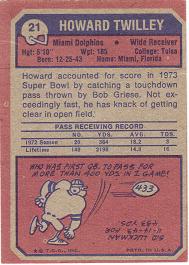 Here is Howard Twilley, College Football Hall-of-Famer and member of the undefeated Dolphins 1972 squad. Twilley was an original Dolphin in 1966, and remained with the team through 1976.

Twilley was also a bit of a forgotten man on a team that ran about 99% of the time (exaggeration) and that had Paul Warfield getting all the plaudits. Topps forgot about him frequently as well. After getting a card in the 1968 (with his helmet on) and 1969 sets, Topps decided not to put him back in the series until the greatly expanded 1973 set, here.

And in looking up his cards to get some background for the set, I found that they had RECYCLED the shot from his 1969 card in the process! 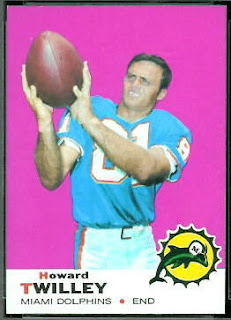 (Thanks to the superstar, All-Pro Vintage Football Card Gallery site )

This is a bit tough to swallow, given that there was FOUR YEARS between cards, and that Twilley had been in two Super Bowls since 1969.

Twilley would miss out on the 1974 set after an injury-filled 1973, but bounce back to return to cards for the rest of his career. Twilley never once led the Dolphins in receiving, as the likes of Karl Noonan, Paul Warfield and Nat Moore usually took that role, but he was a steady possession man and filled a solid role as the team progressed from expansion tackling dummy to All-Time Greatness.

Twilley SHOULD be remembered for his college days at Tulsa, where he was the first athlete to make 100 catches in a single season...in 1965. The next year, he snagged 134 in 10 games.

Let that sink in a bit.....13.4 catches PER GAME. Still the NCAA record. If you were looking for someone solid who knew how to catch a football, certainly you would have chosen Howard Twilley. The Dolphins did, and he was part of the foundation that carried them to two Super Bowl wins.

CARTOON! Big Smilin' Football Guy has a leather helmet on, so we are going to the wayback machine for the trivia question. And we KNOW we are going way back when we look for a good Bears quarterback!!!
Posted by Eric C. Loy at 1:49 PM 1 comment: