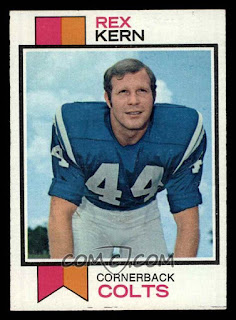 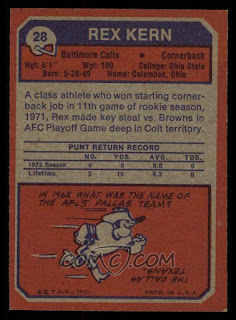 In college football bygones, there were teams that succeeded by running the football, then running it again. Woody Hayes’ Ohio State teams were wildly successful at it, and won the National Championship in 1968 with an undefeated season.

That team was quarterbacked by a great all-around athlete named Rex Kern. His story as a Buckeye is legendary, and he finished in the top 5 for the Heisman award twice. As an example of his fame, check out this photo op, shot for a national publication (stolen from Pinterest): 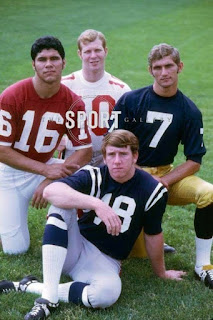 I would do Kern a disservice by trying to break down his legendary collegiate career, so I will look at his pro career. You will notice that Kern is NOT a pro QB, but a defensive back. According to this article fromthe Baltimore Sun, pro teams were put off by a few things…a back injury he had suffered as a freshman basketball player, his size at under six feet, and unknowns about his throwing arm, given that he had rarely been given a chance to show it off as a Buckeye.

The Colts, flush at QB with Johnny Unitas and Earl Morrall at the time, drafted the highly decorated Kern in the 10th round in 1971, as a project athlete. He would not be a pro QB like the others in the above photo, Jim Plunkett, Joe Thiesmann and Archie Manning, but he worked hard with the cards he was given and made a talented squad as a DB.

Eventually he would be a starter for Colts playoff teams in 1971 and 1973, with a back and a hand injury keeping him out of much of the 1972 season. But here is his rookie Topps card. He was featured on a Sunoco stamp earlier, and would have just one more Topps card in 1974.

Kern was the players representative for the team during a strike, and the Colts GM took the opportunity to punish Kern and release him. He was signed by and went to the playoffs for the Bills in 1974, but his bad back ended his career after that season.

Kern did well as president of a Nautilus equipment firm for several decades before retirement, but unfortunately has been slowed by recurring back and hip problems and surgeries. He was named to the College Football Hall of Fame in 2007, and still holds legendary status in Columbus, Ohio.
CARTOON! Big Smilin’ Football Guy is zipping right along, though those boots will make it slippery on 1973-era artificial turf and that hat ain’t gonna provide no protection from Mean Joe Greene. Notice on the back Kern’s height is given as 6-1, the Baltimore Sun article has him at 5-11.