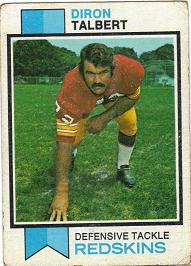 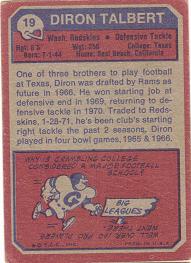 Diron Talbert is about to kick your butt and drink your beer. Though the card isn't in the greatest shape, it boasts one of the best pictures of one of the best defensive linemen of the seventies.

Like the back of the card says, Talbert was one of several brothers to play football. I only knew of Diron; there was a great feature on ESPN Classic...perhaps by Heywood Hale Broun...that interviewed both Diron and his older brother Don during a Rams-Saints game. Diron was on the Rams defensive line, and Don was on the Saints OL. This had to have been filmed in either 1969 or 1970. Diron was on the Rams from 1967 to 1970, then Washington until 1980. Don started with the Cowboys, then hopped to Atlanta from 1966 to 1968, the Saints for two years, then Dallas again in 1971.

All of the newcomers but Talbert would be a part of Allen's geriatric bunch that made it to the Super Bowl after the 1972 season to be beaten by the Dolphins.

Diron Talbert would go on to the Pro Bowl in 1974, and be a second-team UPI All-Pro in 1973. Amazingly this is his rookie card, though he had been around for about six years. He would miss the 1974 set, before becoming a Topps regular in the ensuing seasons.

By the way, the Rams' first three picks of the 1971 draft were Jack Youngblood, Isiah Robertson and Dave Elmendorf, mainstays for years. In 1972 their best pick was a fellow named Lawrence McCutcheon in the THIRD round.

Washington picked Cotton Speyrer in the second round of the 1971 draft, but he never played for them. 11th-round pick George Starke was a lifetime Washington player, getting in aver 150 games until 1984. They had no pick until the 8th round in 1972, where they took RB Moses Denson, who went to the CFL for a year before putting in two seasons for Washington. The only other player from that draft to make it into the NFL was WR Frank Grant in the 13th round, and it took him a couple of years to get past Charley Taylor and Roy Jefferson for playing time...

George Allen went 67-30-1 during his time in Washington, winning records every season. However, he only won two playoff games EVER, and those were in 1972.

CARTOON! Big Football Guy has the ball, a big grin on his face, and a giant "G" on his chest as he runs full-speed to the Big Leagues! For more information about the Grambling question, please refer to the Bob Atkins entry!
Posted by Eric C. Loy at 6:43 PM