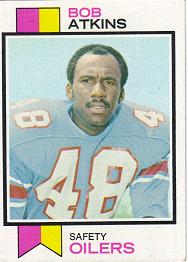 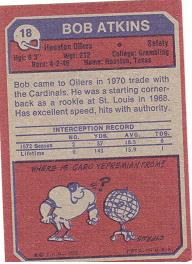 Here is Bob Atkins, making his debut on a Topps card despite having been in the league since 1968. He would get one more card, in 1975. He had a perfectly respectable career in the pros, starting with the Cardinals as a second-round pick and going to the Oilers with QB Charlie Johnson for DB Miller Farr and QB Pete Beathard. He was injured for awhile in 1973, and was done in the NFL in 1976.


Atkins came from Grambling. Looking it up on Pro-Football-Reference , I see about 110 other NFL pros from that storied college. Some great ones, too.

Just from Grambling alone you could have a starting defensive line of Buck Buchanan, Ernie Ladd, Willie Davis and Gary Johnson. Try running through that line. And your defensive backfield could have Willie Brown, Everson Walls, Rosey Taylor and Albert Lewis. A few Pro Bowls there.

Tank Younger was the first Grambling player to make the NFL, in 1949. The next one wouldn't be until Younger's last year in 1958 (Willie Davis), then the floodgates opened, thanks a lot to the AFL creating more opportunities for players like Willie Brown, Buchanan and Ladd. Do yourself a favor and look up some of the articles on how the AFL helped integrate football.

Back to Atkins and the Oilers. Despite having some pretty good players on their defense like Atkins, George Webster, Elvin Bethea and Ken Houston they managed to win just ONE game. They allowed the second-most points in the league and scored the second-fewest. That ain't a blueprint for success.

With their #1 pick in the draft and first overall, they took John Matuszak, who didn't come around for the Oilers and was in a Chiefs uniform the next season. With their second first-round pick they chose RB George Amundson, who averaged less than three yards a carry in his three-year career. They lost their first five games in 1973, brought in Sid Gillman, and went 1-8 the rest of the way.