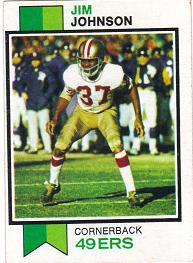 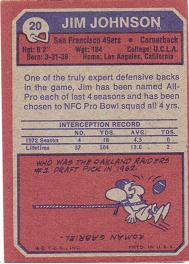 One of the more decorated DBs ever to play the game, Jim Johnson. Hall-of-Famer and quite possibly someone you never heard of.

Johnson was a great football player for the 49ers from 1961-1976. Starting out in the defensive backfield, the Niners moved him to offense in 1962. Johnson responded with 34 catches for an 18.4 yard average, and had a great 11-catch, 181 yard day against Detroit and a 90-yard TD catch against the Bears. San Francisco was 6-8 that year, with some young players on the rise, but injuries to QB John Brodie and HB-QB Bill Kilmer brought in vagabond journeyman QB Lamar McHan in, and they sunk to 2 wins in 1963. Johnson was used occasionally on offense, but had gone to safety for the most part.


While the team didn't improve much the next season, they did get above .500 in 1965 with the addition of a better running game with Ken Willard and John David Crow, and another go-to receiver in Dave Parks. Johnson had settled into the cornerback position by then. The defense had some very solid parts, with Johnson, Kermit Alexander and Elbert Kimbrough in the backfield, HoFer Dave Wilcox and Matt Hazelstine at linebacker, and Charlie Krueger on the line.

The Niners hung around .500 the next few seasons, with a drop to 4-8-2 in 1969. They surged to first place with 10 wins in 1970, as Johnson, Krueger and Rosey Taylor were the veterans of a younger defensive crew that had added Tommy Hart, Frank Nunley, Bruce Taylor, Mel Phillips and Skip Vanderbundt over the last couple of seasons. The offense had a solid offensive line, reliable Willard in the backfield, and Gene Washington the new "it" at WR. They edged the Vikings in the playoffs but lost to the Cowboys for the conference championship. Johnson was All-Pro the second year in a row.

For 1971, they added RB Vic Washington and TE Ted Kwalick became a big part of the offense. They won the NFC West again, and advanced past the Redskins before getting snuffed out by Dallas again. And again, an All-Pro year for Johnson.

Next year, 1972, Johnson made first team All-Pro for the fourth straight year. The 49ers won the division again, and were eliminated by the Cowboys again, this time in the first round. But many of the Niners vital key players were getting up there in years, and they couldn't hold on to their success.

In 1973, Johnson was 35, Krueger was 36, John Brodie 38. The team limped home to a 5-9 record, and Johnson did not make All-Pro or the Pro Bowl. He did return to the Pro Bowl in 1974, and the team registered some fine defensive games. Two shutouts in a row late, and two straight single-digit allowances. Unfortunately, the offense was mediocre at best...they lost one of those games 7-0 ad won one 7-6. 6-8 was the won-loss mark. Johnson stuck around a couple more seasons, but the Niners didn't hit postseason either one.

Johnson was the Niner's first round draft pick in 1961, and one of their all-time best selections. He was thought of as one of the best one-on-one defenders ever, and was certainly good enough to have been an effective offensive player as well.

His first football card is a short print from the 1962 Post Cereal series, and he was on a few Philadelphia cards while Topps was AFL-only. His first Topps card was in 1968. This card is the only game-action shot Topps used for his cards and it is a good one, apparently taken against the Giants on October 15, 1972 in a game the Niners lost.

A columnist once wrote that Johnson was the best defensive back never to play in a Super Bowl. Johnson has the Cowboys to thank for that.