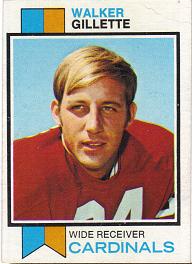 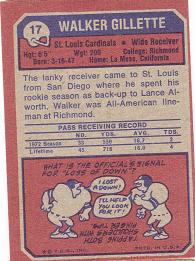 Ladies and gentlemen, please welcome Walker Gillette. Gillette was a solid receiver for the Cardinals and Giants, but had the unfortunate start of his NFL career on the Chargers. He was drafted in the first round by San Diego to a team that had both Lance Alworth and Gary Garrison. Not a whole lot of playing time there.

Alworth went to Dallas the next season, but Gillette still did not get a lot of playing time. The Gray Ghost Garrison was still there, plus rookie Billy Parks had passed him on the depth chart and Jerry LeVias had been added from Houston. Still no playing time.


The Chargers dealt Gillette and another former first round pick Leon Burns to the Cardinals for RB Cid Edwards and WR Dave Williams...check Edwards' entry in an earlier blog for details of his career. In St. Louis Gillette found himself teamed with Ahmad Rashad and Jackie Smith at receiver on what should have been a pretty good offensive team.  It wasn't, with an unsettled QB situation, and the Cards finished 4-9-1.


Mel Gray came back from losing almost the year before to injury for the 1973 season, and, again, Gillette found himself an extra wheel on the bus. He was 6th on the team in receptions behind Gray, Rashad, Smith, and RBs Johnny Roland and Donny Anderson. Gillette was waived before the 1974 season.

Picked up by the Giants, Gillette helped a terrible team improve from 2-11-1 in 1973 to 2-12 in 1974. Wait, that's not an improvement. Anyway, Gillette could have been Gale Sayers wrapped in Jerry Rice and the 1974 Giants weren't going to win much. Gillette improved to 29 passes caught, third best on the team behind RB Joe Dawkins and solid TE Bob Tucker.

1975 would be Gillette's career year, as he led the Giants with 43 catches for 600 yards. The Giants still weren't very good. The next year would be the final one in the NFL for Gillette, as the Giants would demote him after some drops in favor of free agent Jim Robinson. Gillette was waived in early 1977. One Canadian newspaper had the Saskatchewan Rough Riders talking about bringing him in after that, but I could not see where he played for them or anyone else after 1976.

Talk about a tough career path.

This 1973 Card was Gillette's rookie card, and the picture was used, airbrushed very badly into Giants colors, on his last Topps card in 1976. Topps couldn't find the time to get ANY pictures of Gillette on the Giants as his 1975 card was also airbrushed.

Walker Gillette was a Sporting News All-American from Richmond for 1969. On that same team were Phil Olsen (card 14) and Al Cowlings (card 16). Three members of that team in three cards!

CARTOON: Two Big Football Guys, one wide, one skinny. One appears to have lost his down, but his teammate has volunteered to help find it for him! TEAMWORK!
Posted by Eric C. Loy at 7:26 PM