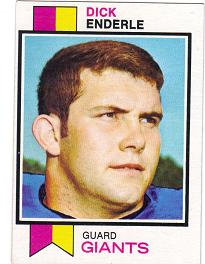 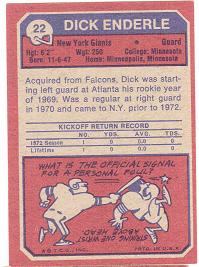 This is Dick Enderle, airbrushed into a stylish neon blue to indicate that Topps did not take a picture of him during the 1972 season. He was a Falcon, as the back text describes, from 1969 to 1971. He was dealt to the Giants in 1972 for a late draft pick and placed on the taxi squad before the 1973 season, activated before the games started up.


During that season, he got into at least one scrape in practice with a teammate, LB Pat Hughes, and the team as a whole suffered through a terrible 2-11-1 season. They won the first game in 1973 over the Oilers, and Enderle would play a controversial part in the second game of the year against the hapless Eagles. Pete Gogolak launched a field goal as time expired to salvage a 23-all tie, but Eagles coach McCormack said game film showed Enderle moving before the snap. The refs didn't see it, and some press said the Eagles were "robbed" of an "upset" victory. Philly would actually finish with three more wins than the Giants, the Giants would go 1-11 the rest of the season.

Enderle was waived by New York in November of 1975, and his career gets sketchy after that. He was in the Saints training camp in 1976 but was cut, picked up by the 49ers a couple days after that. Cut in September after a few games, he was signed by the Packers in October and finished his career there. A Milwaukee newspaper article at the time mentioned that Enderle had played for the Broncos, but I could not find any confirmation of that at all.

The 1973 Topps series can be looked at the same way one would look at expansion teams in major sports. Many athletes would play just the one expansion year, and not before or since. Enderle's only football card was this 1973, and there will be many more one-and-dones at we continue this set. Topps made some interesting choices on who to include, and I've managed to cull a few 1973 pics of players who did NOT make the cut that I'll display sometime.

ERROR ALERT! The otherwise useless stat on the back of this card has Enderle falling on a kickoff just once in his career. Pro Football Reference says he returned another kick in 1971 for 20 yards against the Vikings. Not bad for an offensive lineman.

CARTOON! Smilin' Big Football Guy clobbers running Big Football Guy with a billy club, causing a star to erupt from the player's helmet. If smilin' guy can get to that star, he will be invincible for a short period of time.
Posted by Eric C. Loy at 1:15 PM